Bring the kids for a fun filled, light hearted day of spectacular sights are the circus! During my childhood I remember books like Dr. Seuss’s If I Ran the Circus and going to a few circus shows in local school gyms after my parents got discounted tickets. Looking back I realize these spectacles were cruel and exploitive of the animals involved in the performances, but never the less, at a young age they enchanted me. However, it’s important to note that the history of the circus also includes the origin of the sideshow. The freaks which society would normally shun had a spotlight shone on them in a moment of grandeur and curiosity.

The Vintage Everyday recently did a piece highlighting some long lost photos from past incarnations of the circus.

The Creator and Conman of the Circus

The most recent representation of the sideshow and circus was with the 2018 release of the movie The Greatest Showman, in which Hugh Jackman is presented as the charismatic ring leader, P.T. Barnum, of a rag tag team of outcasts. Even the number in which all the sideshow performers sing, “This is Me” as a moment of empowerment it completely erases from history the fact that, when it comes right down to it, P.T. Barnum exploited people with disabilities.

One of the earliest examples of this was the literal purchase of his first act, Joice Heth, for $1,000. He then carted her around the states touting her as the 161 year old nurse of George Washington. Heth, of course, was found to be only 80 years old at the time of her death. Part of the heinousness of this situation was the concept that an eldery, blind, black woman was a spectacle. This created the stigma that that which society abhorred could be show.

Abundance of Fame, Lack of Agency

Barnum’s exploitation continued with the acquisition of a young 10 year old boy by the name Charles Stratton, who would late famously be known as Tom Thumb. Tom Thumb became one of Barnum’s highest grossing attractions due to his abnormally short stature. As a 10 year old boy, however, Charles was left with no agency or ability to make decisions on his own. 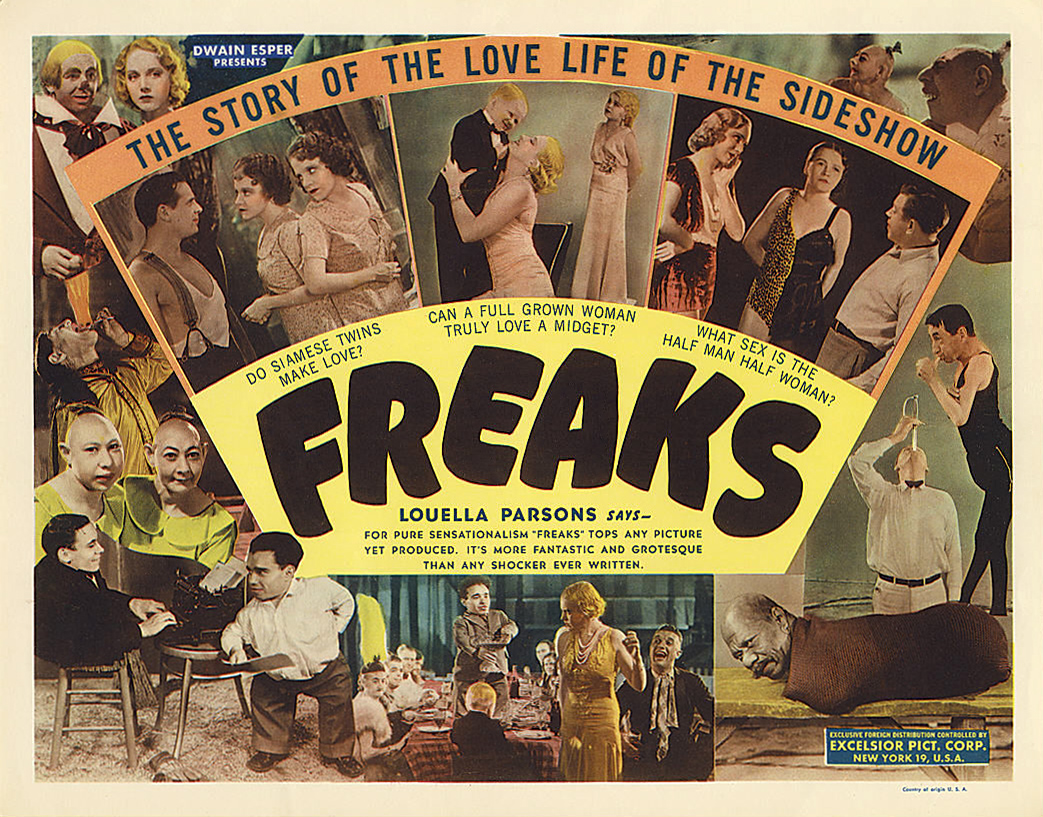 Poster for the 1932 movie, Freaks. The movie depicts a group of circus sideshow performers uncovering a fraud prompting revenge.

While the performers did tend to live lavish lifestyles, they did lose their pride and a piece of their humanity. Something which they intrinsically could not control; a deformity, a disease, and mental health issue render them an object to be displayed to a gawking crowd.

The stories of Barnum’s dark past don’t end there but in this blog post will. I suggest if you’re tempted to attend a circus in the near future you research the subject and teach your children compassion towards their fellow man and especially those with disabilities.

The practice of the “Freak Show” is still present in modern day but in which the performers have self agency and autonomy. One of the most infamous of these is the Coney Island Circus Sideshow. The group is a non-profit dedicated to keep alive the American past time of the circus sideshow.

I personally have attended the sideshow and was thoroughly entertained. While there was handful of us for the showing sitting in a dark room on bleachers similar to your high school’s wooden bleachers fro 1950. In front of us was a stage, during which you could occasionally see performers behind the curtains reading their acts. The act featured sword swallowers, blockheads, jugglers (of FIRE), along with one performance I was actually asked to participate in on stage!

Have a Seat in the Electric Chair

I was instructed to sit on a metal folding chair after walking up on stage . While sitting, I was to instructed to stick out my tongue, straight into the air. I was informed that this performance was called, “The Electric Chair.” Oh, goody. I stuck my tongue out as instructed and the electricity to the chair was turned on beneath me. While I felt a charge, it was in no way painful. In fact, it felt like when you have way too much espresso without eating a full meal prior. The performer approached me with a long tube light lulb and slowly lowered it to closely to my tongue. While not completely touching my tongue I saw the bulb light up brightly. I felt like a human Tesla experiment. None the less, I felt elated to be part of a such a unique experience!

It’s important for us to pay tribute to our cultural history, such as the circus and the sideshow, which recognizing the painful and dark shades of it from the past. We’ve managed to dispel the notion that those with disabilities or malformations should be viewed as spectacles to be kept behind curtains Instead, we embrace the concept of performers perfecting their craft, no matter how bizarre it is.